News : Sleep in a bubble and watch shooting stars!

What are the next shooting stars?

- The Lyrides: located in the constellation Lyra and active from 15 April to 29 April, the Lyrides meteor shower peaks on the night of 21-22 April

- The Aquarids: active from 15 April to 27 May, mostly visible in the southern hemisphere, the meteor swarm is supplied by Halley's comet. Its peak is on the night of 4-5 May.

- The Perseids: made up of the debris of comet 109P/Swift-Tuttle, the Perseid meteor shower is the most famous of the year because it is one of the most active. This meteor shower in the constellation Perseus runs from 14 July to 1 September, with a peak on the night of 11-12 August. It is the most spectacular of all, with 100 shooting stars per hour!

- The Orionids: active from 26 September to 22 November, they are particularly observable from 20 to 21 October, in mid-autumn. The Orionids, which take their name from the constellation Orion (easy to recognise, its seven brightest stars form a bow tie or slightly inclined hourglass!), are visible in the northern hemisphere at this time of year. Depending on the year, between 50 and 75 shooting stars pierce the sky every hour.

- The Leonids: located in the zodiacal constellation of Leo, the Leonids shooting star shower appears from 3 November to 2 December with a peak of activity from 17 to 18 November. If 10 to 20 shooting stars can be observed in the sky every hour, every 33 years, the show becomes unforgettable after the passage of comet 55P/Temple-Tuttle: the shooting star shower then becomes a storm, with thousands of meteors in one night!

- Geminids: produced by a celestial object called "3200 Phaethon", the Geminids come not from comets, but from asteroids. Active from 19 November to 24 December, their peak of activity is between 13 and 14 December with an hourly rate of 60 to 75 meteors, and even 120 to 160 meteors per hour at their peak. To observe them, view the constellation Gemini above the eastern horizon.

- The Ursids: This shower of shooting stars is active from 13 to 24 December, associated with comet 8P/Tuttle. The peak of the Ursids occurs just before Christmas on the night of 21-22 December. It is of low intensity, with 10 to 20 meteors per hour.

How to observe these shooting star showers?

Comfortably installed inside the bubble in your bed, with your eyes facing the Milky Way!
No need for special equipment! The shooting stars are visible to the naked eye. There is no need to take a telescope, given the high speed at which the fireballs pass through the Earth's atmosphere (an average of 50 km/second). About a quarter of shooting stars leave trails that are visible for several seconds.
In order to observe a shooting star shower optimally, the sky should not be obscured by clouds or light pollution. 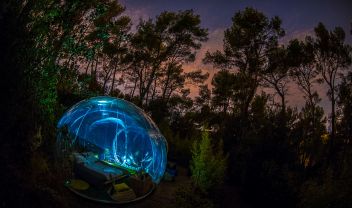 BACK
Page top
By using this website, you agree with our use of cookies to improve its performance and enhance your user experience.